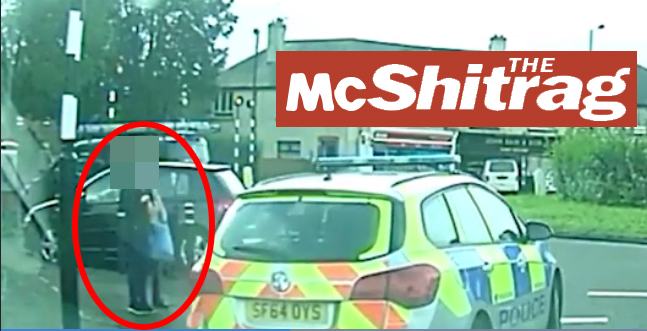 So-called Shocking footage has today revealed how a McShitRag so-called ‘News’ organisation has, once again, missed a trick to educate youngsters.

After scouring social media for so-called ‘News’ the lazy ignorant fuckwits at the McShitRag have, once again, decided that blasting the police in order to garner ad-revenue from clickbait shite articles is more important than trying to impart road safety advice to its dwindling audience.

The so-called ‘Reporter’ probably feels really proud of themselves because they’ve managed to use their superior intelligence to blast the police; even though, if they’d thought about it, they could have used the footage to do some good instead of acting like an apparent cunt.

The so-called ‘Reporter’ – who has 176 followers on Twitter – could have had a think.  They could have thought “Hmm, perhaps I can use this as an opportunity to reinforce the guidelines laid out in the ‘Green Cross Code’ [or whatever it’s called in Scotland].”

From an early age, youngsters are told to ‘Stop, Look & Listen’ before crossing the road’ – Even on ‘Zebra Crossings’.

The so-called ‘Reporter’ could have done some good by reinforcing these simple rules.  But no.  They’re just a fuckwit.