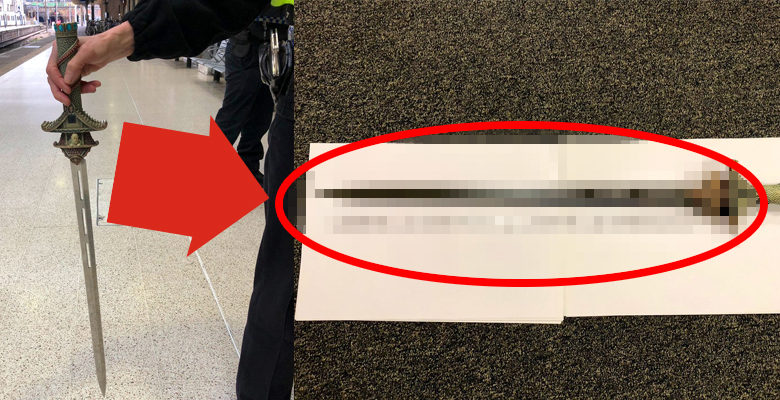 The internet has gone into MELT DOWN following the shock release of a ‘Tweet’ from the real proper British Transport Police earlier today.

Officers were called to Kings Cross earlier and removed a 15 year old Male off a @GNRailUK service. This was concealed down his trouser leg ?Arrested & currently being dealt with in custody. pic.twitter.com/WmUOoUYg25

It’s bad enough that a piece of shit underclass buffoon was locked up after having a massive sword shoved down his trousers, but what the British Trainspotting Police did next will leave you in SHOCK. SHOCK we tell you.

In a blatant disregard for the public purse, the Trainspotting Cops spent DAYS searching for not one, but TWO rulers to photograph the massive sword against.

A spokesperson for the “Wage Payers Alliance” said,

…The use of two rulers shows a blatant disregard for how money is spent by the Trainspotting Cops. They could have photocopied the one; and used that. It’s an utter waste of money to have TWO rulers in one nick. Plus, they would have spent days trying to find one ruler alone; let alone two. I’m fummin…

The ‘Melt Down’ took place when Bullshire Police called the Train Spotters out:

Where on earth did you find TWO rulers?

One of our intrepid so-called reporters approached Bullshire Police for comment; who, surprisingly, spoke to us:

…You’re just like the real so-called news outlets. You’re a bunch of lazy twats who sit and monitor social media all day. If you see something you can twist or juice up a little bit; you’re all over it. From the comfort of your spare bedroom you create a shit ‘clickbait’ headline, steal other peoples’ content and make up some bullshit so-called ‘story’ around it.

All for a poxy bit of ad-revenue from your ad-infested wanky website.

Fuck off. We’re busy catching crooks; unlike you bunch of cowardly vulture cunts…