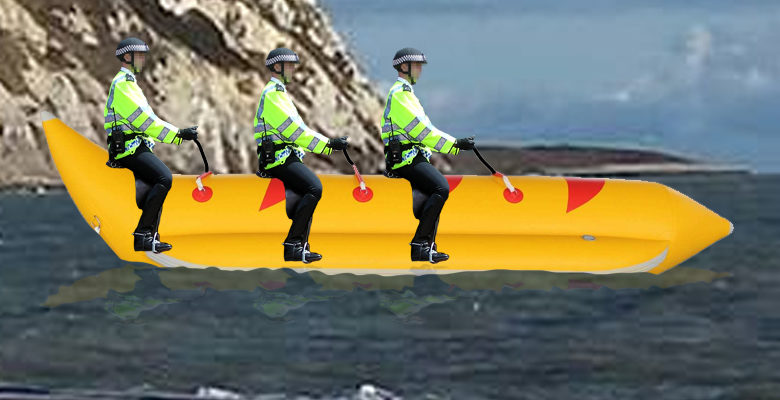 In a bid to help prevent the so-called ‘Migrant Crisis’ in the English Channel, Bullshire Police have seconded a ‘Banana Boat’ and crew to assist the UK Border Farce.

After considering the question of choosing to procure a personalised ‘Border Farce’ drinking vessel, read on.

According to the so-called news and the internet, there’s a ‘Migrant Crisis’ which has resulted in Bullshire Police deploying a banana boat and crew in a bid to help the UK Border Farce.

Landlocked Bullshire has had a ‘Police Marine Unit’ and, for the first time in history, its Police Officers might actually have to get off their arse and do some work.

However, Bullshire Online can exclusively reveal that Bullshire Police sold the speedboat they won on Bullseye in 1984.

…Back in the day we had a few coppers who were good with the arrows; but we’ve since sold the dartboards. And closed the canteens, obviously.

Back in 1984 a cracking dart playing DI went on Bullseye with a fit DC who was also quite clever despite being blonde and having a nice rack.

They got through to the final and managed to win the fucking speedboat!

We didn’t think we’d need a speedboat so we sold it and brought a Mini Metro.

We’ve still got the Bendy Bullies though. They go for quite a bit on eBay these days so we’re holding onto them for when we need to buy some more TASERS or something…

A number of Bullshire Citizens have branded this effort as a ‘…waste of time…’ because the banana boat just sits in the sea and goes nowhere. Apparently it’s against the Health & Safety Act 1827 to allow Police Officers to have oars.