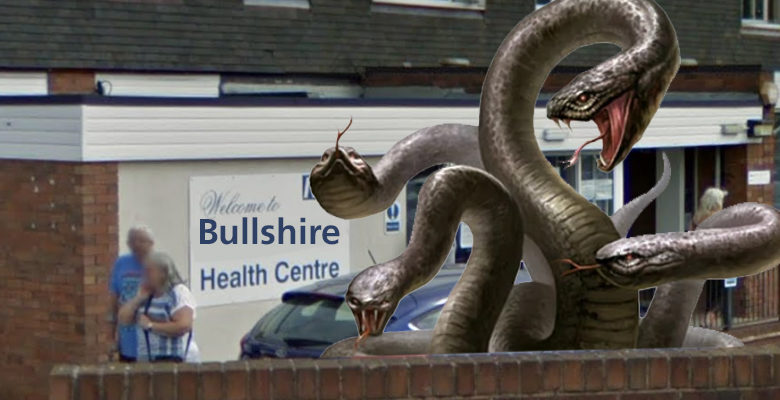 You’ve probably had great difficulty in the past getting an appointment with your GP; but it’s about to get much, MUCH worse!

Bullshire Online can exclusively reveal that, from today, multi-headed mythological serpents will be employed as ‘Guardians of the Appointment’ at all doctors’ surgeries throughout Bullshire; in a bid to frustrate poorly people more than they do already.

You’ve probably experienced it yourself.  You’re feeling a little unwell; but, because you’re not a selfish entitled snowflake, you don’t want to burden the overstretched Accident & Emergency staff at Hospital so you try to get an appointment with your GP.

You patiently try to call your surgery between 8.30am and 8.45 in an attempt to secure an appointment within the next month or so; but you either can’t get through or when you do, there aren’t any appointments available until 2026.

You might be one of those people who get the bus down to the surgery and try to secure an appointment face to face?

Bullshire Online can exclusively reveal that it’s going to get much more difficult to see your doctor.

Multi-headed serpents have long been used to guard mythological locations against attack; so the bosses of Bullshire Hospitals – one of whom has a 2:2 degree in Greek Mythology – have decided that they will employ a ‘Hydra’ at each and every GP Surgery and community clinic thing throughout Bullshire.

The Hydra will not only be the public face of the surgery or clinic, but they will also be responsible for answering the telephone.

Early trials of this revolutionary concept resulted in one of Hydra’s heads being cut off; but that just resulted in two heads growing in its place; and, therefore, an extra opportunity to answer the phone.